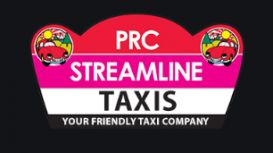 Streamline Warrens Taxis are the oldest and probably, most respected independent taxi operator in the Bournemouth area. Originally established in 1950, the company took the name Warrens from Mr. Gilbert Warren in 1961. It was subsequently bought in 1994 by Mr. & Mrs. Vincent who both had over 30 years' experience in the taxi trade. During their ownership, Warrens Taxis took over 3 other local companies and became Streamline Warrens Taxis in 2001. The present owners are Mark & Nicky Smith, who formed the current limited company in 2003.

Mark & Nicky also have many years' experience in the trade and are actively expanding the business, by investing in new technology and vehicles. In July 2007, Streamline Warrens invested in the very latest computer 'intelligent despatch' system from CORDIC. Every vehicle on the fleet now has satellite navigation as standard, and being an 'intelligent' system, it means that the closest vehicle is despatched to each job as it comes in.

We do not have any reviews about PRC Streamline available right now.

This business has no reviews yet.